In summer 2018 we went to Salvador for a shooting. During the stay we met the rapper Shook MC and his guys and spontaneously decided to shoot a VR video for their new song. 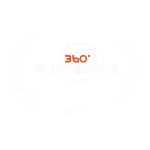