In coproduction with FMX and Expanding Focus we shot a stereoscopic 360 VR documentary about the future of VR. In this interactive app the viewer enters a time-capsule that takes one through the history of the technology as well as the outlook about the future of VR in an 360° Esher-like space. The people who are sharing their thoughts have been working in the field of VR for more than two decades and can be considered real pioneers in this field. The space which the experience happens and the discussion we can follow only exist in VR. At the same time the experience hints exactly to this point through its visual style and through the speakers referencing to the space they are seen in. 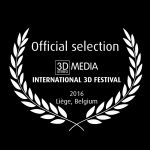